How to Implement the Hypoglycemic and Hyperglycemic eCQMs 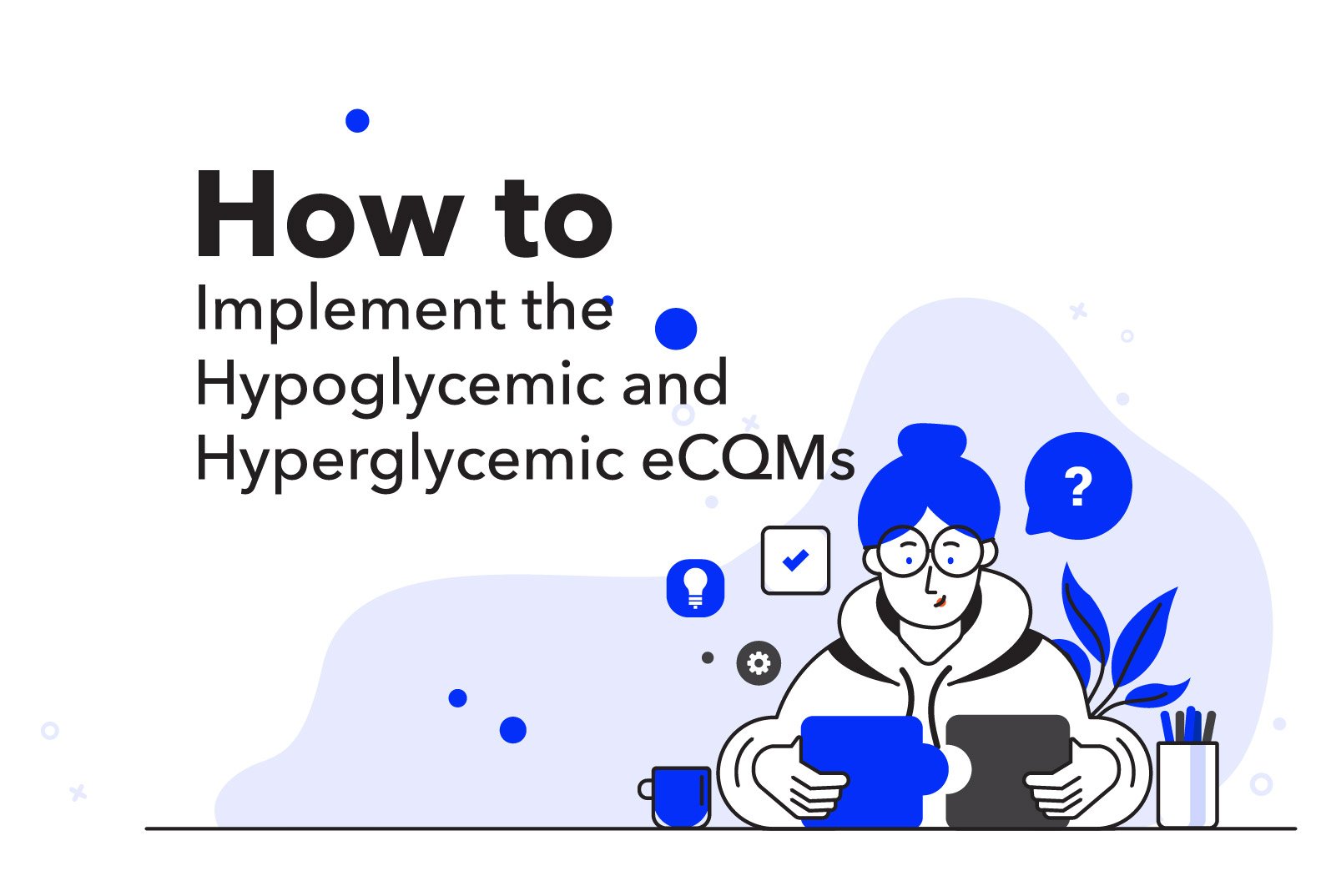 CMS introduced several new eCQMs over the last year including a pair of measures that track your care of inpatients experiencing a hyperglycemic or hypoglycemic event.

The measures are available for submission in 2023 but are not required and are not scheduled to be mandatory measures (unlike some other measures from the recent CMS ruling). That doesn’t mean you should ignore these measures because in 2024, your hospital is required to submit three mandatory eCQMs and select three additional eCQMs for submission. That’s a total of six eCQMs.

Additionally, CMS is retiring ED-2, STK-6, PC-01, PC-05, and PC-06 in 2024. You may want to consider implementing these hyper and hypoglycemic measures as an alternative to any measures you submit now which will be retired in 2024.

Oh, and don’t forget there are two required hybrid measures!

When you begin the process of implementing a new eCQM it’s extremely important to have the correct people involved in the process. It will help you to have Quality and IT represented as well as additional clinical representatives who understand the bedside workflow and the documentation process. Get their input to implement this measure in a way that works for them.

When I read the specification, I always start with the rationale and guidance, and in this case, I think the rationale helps you understand why you would want to implement this measure. It provides you with a good explanation that you can share with your team.

Here’s the specification. I suggest you follow along with the HTML version as you read.

We are going to start at the top of the spec sheet with the Rationale. 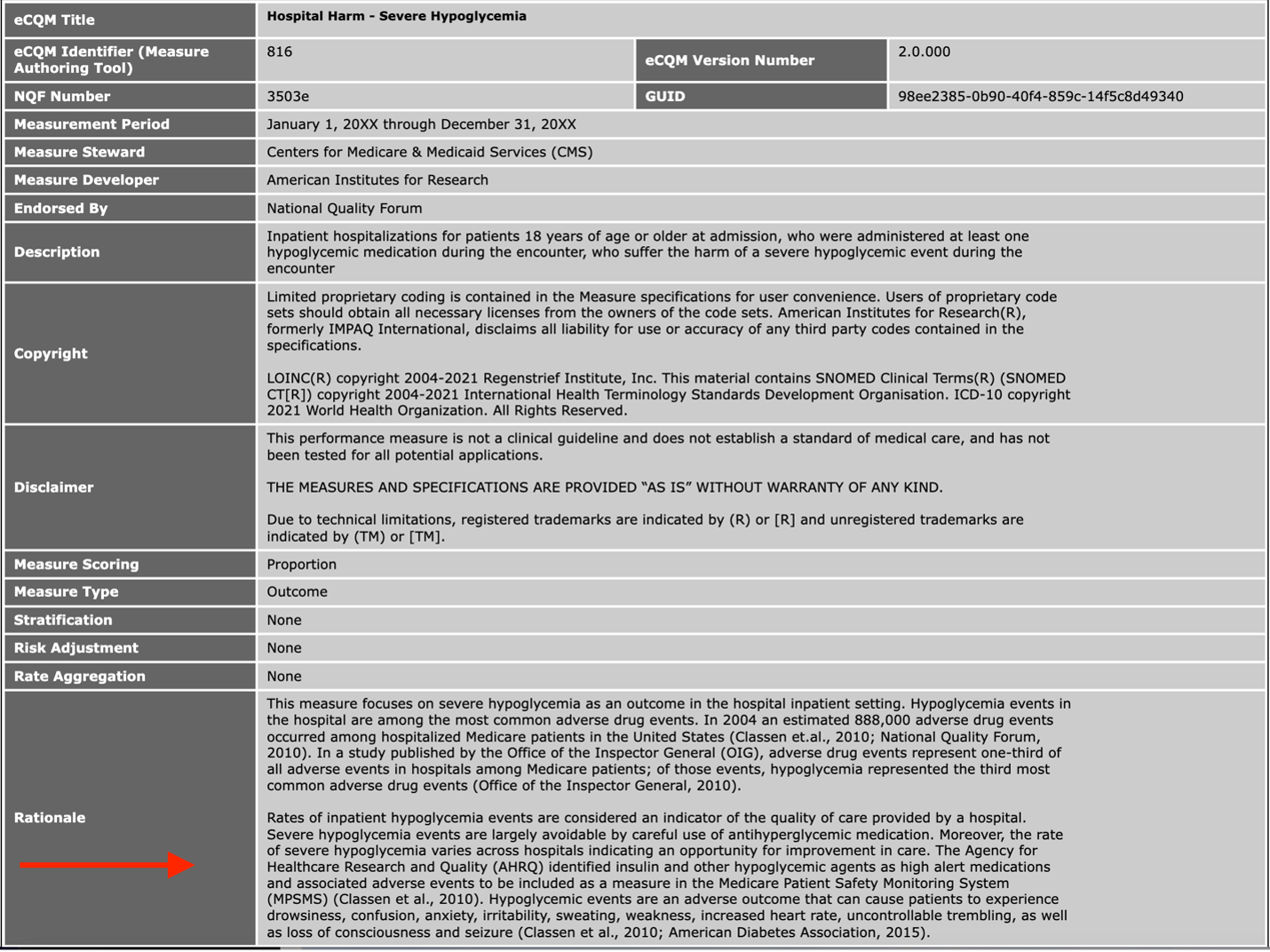 This measure was developed because hypoglycemia represented the third most adverse drug event in hospitals. It can largely be prevented through careful antihyperglycemic medication and the rate of “severe hypoglycemia varies across hospitals indicating an opportunity for improvement in care.” It’s identifying these opportunities for improvement that drives this measure implementation.

At the top of the specification are things like rationale and guidance, but it’s the bottom of the spec that’s important for you to dissect and understand. The bottom of the spec is the logic section which contains the Population Criteria, Definitions, Terminology and Data Criteria (Data Elements). This can appear overwhelming and confusing at first but it’s not as complicated as it seems if you follow along.

You then scroll down to the Definitions section and locate the definition for “Encounter with Hypoglycemic Medication Administration". This definition contains other terms in quotes that have separate definitions that you must find and then read through.

Look at the picture below. Encounter with Hypoglycemic Medication Administration is defined as “Qualifying Encounter“ InpatientEncounter. Each statement in quotes has a corresponding definition (also pictured). You must then go read the definition for every single statement until you completely and fully understand what this measure is asking of you. This requires a lot of scrolling but is worth the effort as you’ll have a better understanding of the measure requirements when you’re done! 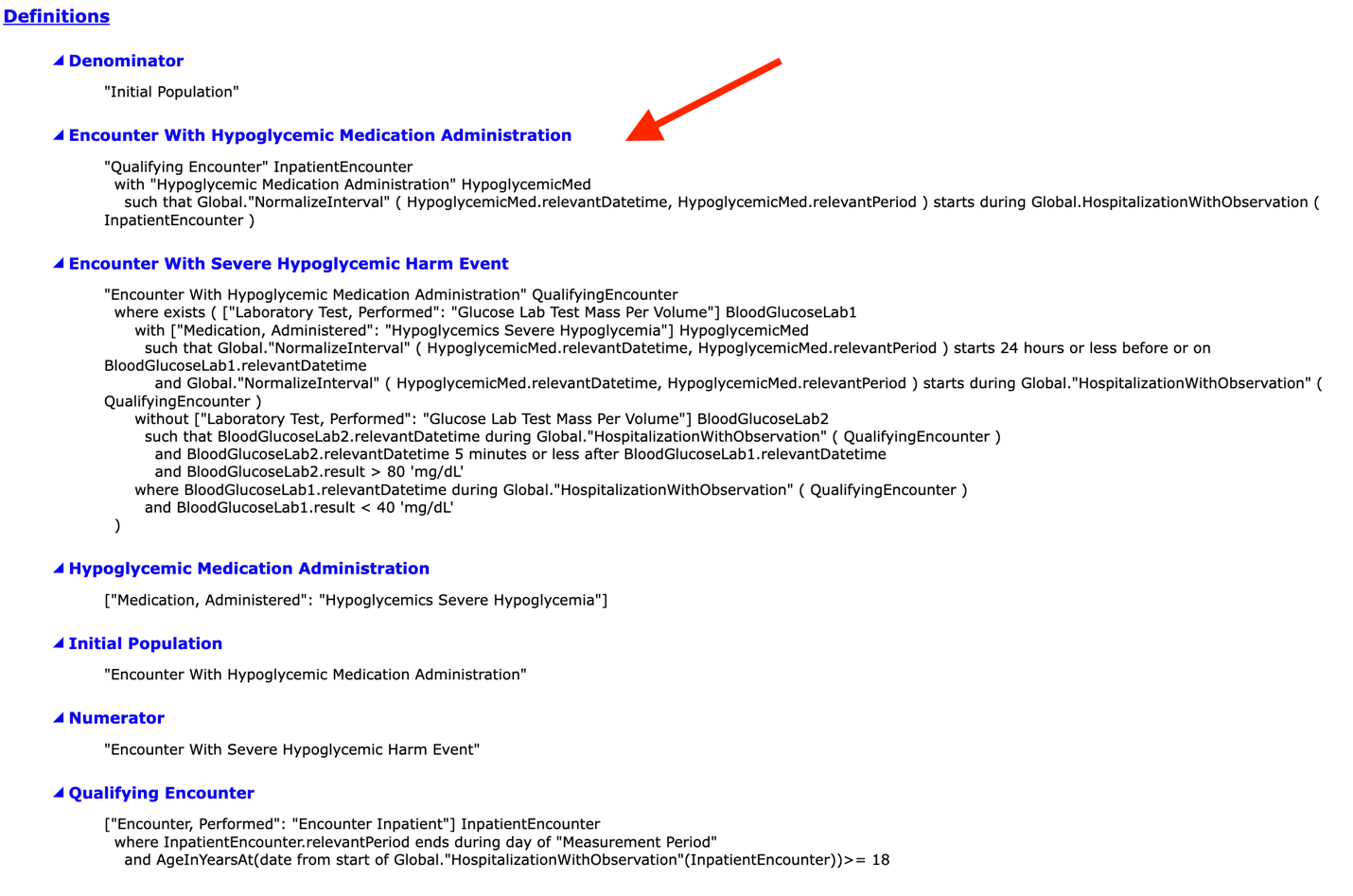 Now even though we’ve reviewed how to read a specification, it’s still a bit confusing and takes time to fully grasp. So instead of asking you to figure it out for yourself, I have a simplified review of the populations to help guide you through these measures.

The first thing to note is that this is an inverse measure. You want a low performance rate. You do not want patients in your numerator. Overall, this measures evaluates and reports the proportion of inpatients who are administered a hypoglycemic medication and experience a severe hypoglycemic event during the encounter.

Let’s start with the Initial Patient Population which contains the first group of patients that qualify for the measure.

To get into the Initial Patient Population (IPP) the patient must have an inpatient encounter. They must be 18 years of age or older and had at least one hypoglycemic medication administered during the encounter.

For this measure, the Initial Patient Population and Denominator are the same.

There are no Exclusions or Exceptions.

Layman’s description: Anyone who had a hypoglycemic medication administered within 24 hours before a blood glucose result of less than 40 mg/dL. If you repeat the blood test within 5 minutes and the patient’s result is greater than 80 mg/dL the patient won’t be put into the numerator.

Only the first qualifying severe hypoglycemic event is counted in the numerator, and only one event per encounter is counted. The 24-hour and 5-minute timeframes are based on the time the blood glucose was drawn, since this reflects the time that the patient was experiencing that specific blood glucose level. Note that the timing component of this measure captures when the blood collection was taken, not when it was ordered or resulted.

Your performance rate is then calculated using these populations. Remember, a lower number is better.

Setting up the HH-01 workflow

Once you’ve pulled apart the specification and understand the population requirements, the next step is to do a current state analysis of where these items are currently captured in your EHR and compare that to the measure populations and requirements. I find that a workflow graphic like the one I’ve provided below is helpful as you do this process.

You’ll see (from left to right) I listed the different populations followed by the population criteria statement(s) and data elements, then the expected EHR process for capturing the documentation. Lastly, we’ve provided the type of codes you’ll need to map to capture that element. Review this, compare to your current workflow, and identify what you’ll need to adjust and update to align with the measure requirements. 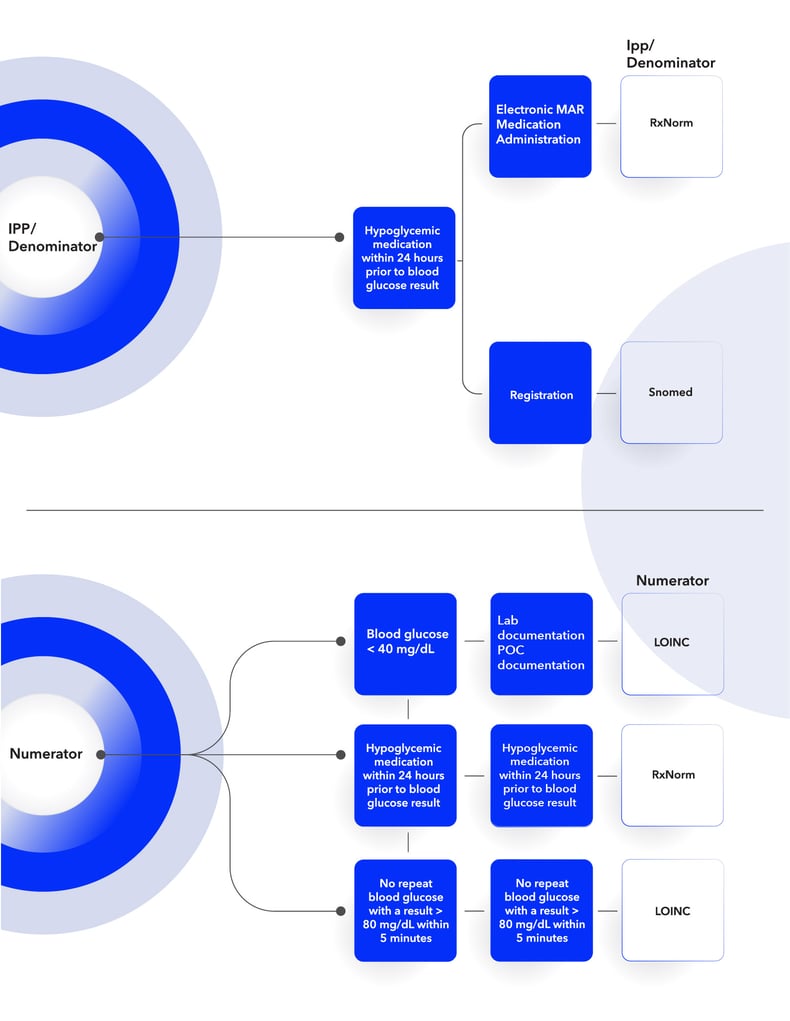 Let’s move onto the Hyperglycemia eCQM (HH-02). Here’s the specification.

This measure is similar to the Hypoglycemia measure. Hyperglycemic events can largely be prevented through careful glycemic medication and the rate of hyperglycemia varies across hospitals, which again means there is room for improvement.

It evaluates the first 10 days of an eligible hospitalization to determine the number of eligible days. Hospital days are 24-hour periods that start at the time of admission, and it includes ED and Observation stays.

Let’s review with Initial Patient Population for this measure.

Layman’s description: To get into the Initial Patient Population (IPP) the patient must have an inpatient encounter. They must be 18 years of age or older and had at least one of the following: diabetes diagnosis, or administration of at least one dose of insulin, or a hypoglycemic medication, or at least one blood glucose result of greater than or equal to 200 mg/dL.

The Initial Patient Population and Denominator are the same.

There are no Exclusions or Exceptions.

Layman’s description: Patients are counted in the numerator if they had a hyperglycemic event within the first 10 days of the encounter (excluding the first 24 hours). A hyperglycemic event is a high blood-glucose reading (>300 mg/dL) OR if you didn’t perform a blood test after two consecutive days where the patient had a blood glucose level of >200 mg/dL.

Note that this is slightly different than how we calculate other eCQMs. Usually, rates are calculated according to nights spent at the facility. This measures 10 days from the time the patient arrives at your hospital.

Setting up the HH-01 workflow

Below is the workflow diagram for the Hyperglycemic measure. Review this, compare to your current workflow, and identify what you’ll need to adjust and update to align with the measure requirements. 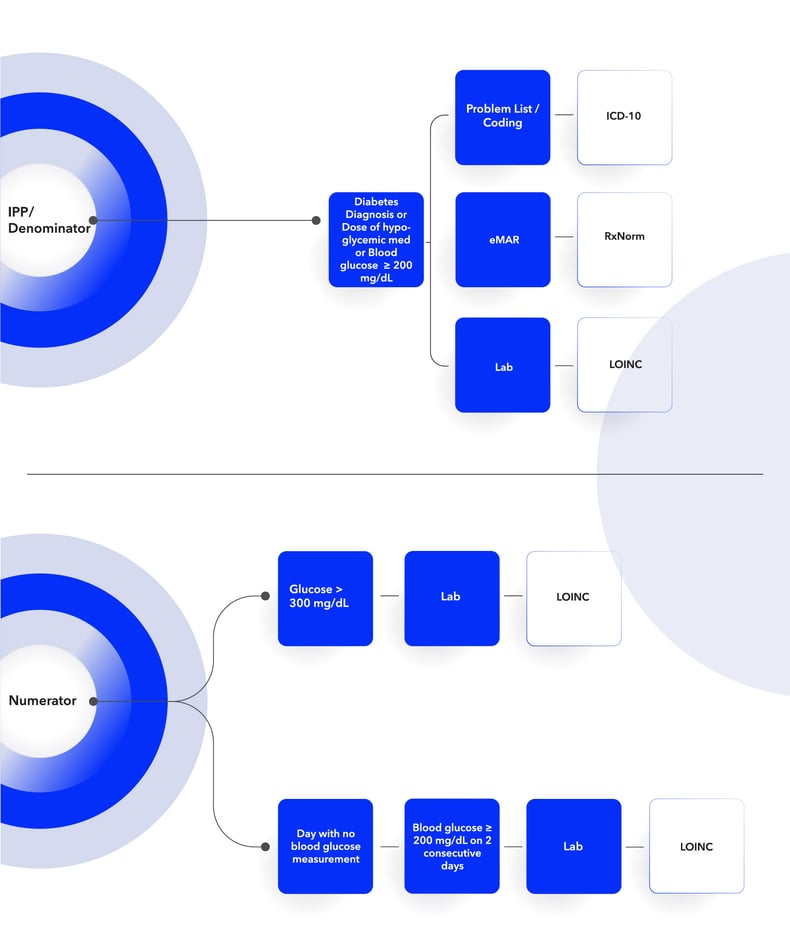 With both measures the key to a successful implementation, is to ensure those medications are mapped as well as the LOINC codes from the blood glucose lab results. That’s the majority of the mapping you have to do for these measures.

I’ve done these eCQM reviews for a long time now and I can assure you that no matter how much time you spend with the specifications, it doesn’t really click until you’ve set it up and worked through an actual patient who qualifies for the population(s). Only then can the validation and improvement work begin

Don’t go it alone! Reach out to us today to talk about how we can help your team. Leave all this measure deciphering to us. We guide you as you set up the measure, troubleshoot technical errors and come up with strategies for improvement like clinician adherence. Request a demo of our ENCOR for Electronic Hospital Measures software today.

Kristen Beatson is the Vice President of Electronic Measures at Medisolv, Inc.